Toimitus
Yleinen
A A

As someone who aspired to be a musician from a young age, I was very interested in music history, always wanting to know more about the origins and the development of the music that intrigued me. This was especially true when I became interested in jazz when I was about nine years old.

Via the public library and my father’s record collection, I read about and listened to the Masters of Jazz from the earliest days of classic New Orleans jazz to more modern musicians like Miles Davis and John Coltrane. Along with learning how to play and compose jazz music, the history of this wonderful art form became a major interest for me.

My first exposure to Finnish jazz happened during my first trip to Finland in October 1989 when I went to Helsinki to visit my wife, Riina Tamm, who was studying at the University of Helsinki. From what I heard in the record stores (the Fazer Musiikki then on Aleksanderinkatu) and in the clubs, I was very aware of the quality and individuality of Finnish jazz.

On this same trip, I was lucky to hear a jazz radio show on YLE hosted by Jukka Haavisto (the vibraphonist and at the time, the Manager of the Finnish Jazz Archive) where he played recordings by the legendary Harmony Sisters (singing “Josef, Josef”) and the great Dallapé Orchestra.

That radio broadcast (which I taped on a cassette) whetted my appetite to learn more about the history of Finnish jazz. The energy and swing that came through on these older recordings was captivating and I was determined to find out more about Finland’s jazz history.

During the late 1980s, an English record company (Harlequin Records) produced a series of LPs that spotlighted the jazz history of various countries including Finland in a series called
“Jazz And Hot Dance Music.” I looked high and low for this LP in Helsinki during that 1989 trip but was unsuccessful in finding it.

Riina returned to Helsinki in 1994 for a trip on her own and I asked her to see if she could find a copy of the “Jazz and Hot Dance Music in Finland” LP. This time, Riina went to what was and is the jazz record store in Helsinki, Digelius Music located at Viiskulma. 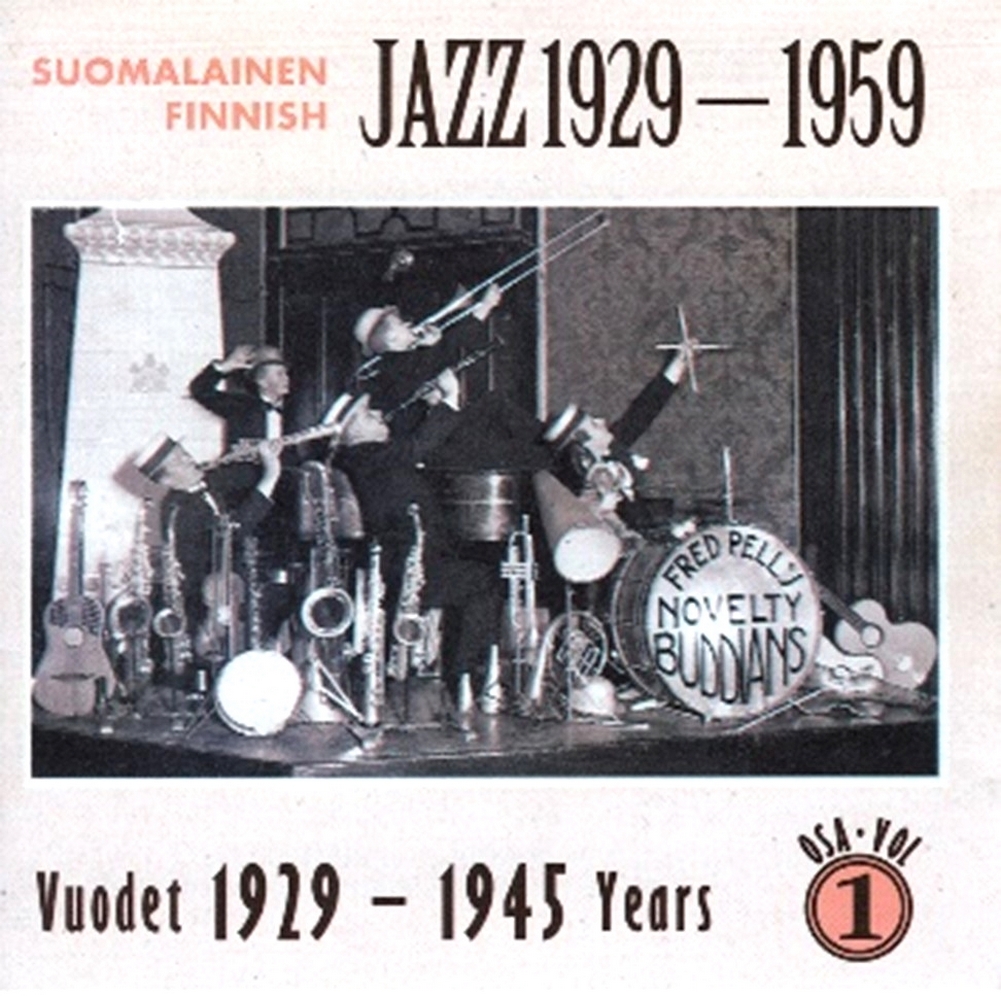 The LP wasn’t in stock but fortunately, the legendary founder and owner of the store, Emu Lehtinen directed Riina to the eight volume CD series “Suomalainen Jazz 1929-1959” produced by Jukka Haavisto and the Suomen Jazz-Arkisto.na purchased the first volume (“Vuodet 1929-1945”) for me which featured some of the pioneers of Finnish jazz including The Ramblers Orchestra, the Dallapé Orchestra, Toivo Kärki and saxophonist Matti Rajula.

After hearing this first volume, I made sure to purchase the remaining volumes as they were issued.Another important contact with Finnish jazz and jazz history for me was made in the summer of 1998 when I visited Estonia to play a series of concerts with the great Estonian jazz pianist, Aldo Meristo. The excellent bassist in his otherwise all-Estonian group was Atro “Wade” Mikkola from Helsinki. After meeting Wade at a rehearsal in Tallinn, we found that one of many things that we had in common was a love for jazz history.

By that time, I had been teaching jazz history for several years at Vancouver Community College and Wade was also teaching jazz history and African American music classes for Sibelius Academy, so we had lots to talk about. Wade has been a generous resource for me in terms of Finnish jazz history, giving me CD copies of rare recordings such as the legendary 1959 EP “Jazz: Made in Finland” which is a must-have for anyone interested in jazz of the 1950s, Finnish or otherwise. “Jazz: Made in Finland” introduced me to the music of the late, great Pentti Lasanen (saxes), pianist Teuvo Suojärvi and guitarist Herbert Katz.

During the summer of 1998, Wade told me that he was putting together a project that saluted the key figures of Finnish pop and jazz song writing for a CD titled “Muistatko-Remember”. The repertoire for the CD (which was recorded and released in 1999) featured Wade’s arrangements of songs by Toivo Kärki, Erik Lindström and Lasse Mårtenson, among others.

The resulting recording was an imaginative updating of some Finnish “classics,” and I was very fortunate to play all of this music with Wade when he (along with pianist Lasse Hirvi, saxophonist Pekka Toivanen from Finland and Vancouver drummer Craig Scott) appeared in the 2005 Vancouver Jazz Festival at CBC Radio’s “Studio One”. It was exciting to play this great music.

While Wade, Lasse and Pekka were in Vancouver we also played a dance at the Scandinavian Community Centre where Craig and I were given our first exposure to the wonderful humppas and tangos from Finland which we sight-read at the dance portion of the evening. After these events, I started featuring songs like “Toiset Meistä” and “Siks’ Oon Mä Suruinen” on my own jazz gigs in Vancouver (and getting my students to learn them as well!). Riina and I returned to Helsinki together in 2003 and during that time, I had the opportunity to play with pianist Matti Konttinen’s group at the Storyville Jazz Club. He and the rest of the band (which included vibraphonist Jukka Haavisto) were very gracious to me, and I was honoured to play alongside these wonderful musicians. A special bonus that evening was when the great vocalist Helena Siltala sat in with Matti’s group.

It was a thrill to hear her as I was familiar with her early recordings via the “Suomalainen Jazz” CDs, and she was in great form that evening weaving her musical magic on “Embraceable You” and other songs.

Starting in 2008, Riina and I made almost yearly trips to Finland where I have had the opportunity to play and record with Wade Mikkola, to teach at the Otava Jazz Camp and even to work a shift or two at Digelius Music (where I helped sort and catalogue a massive collection of 78 r.p.m. jazz records that arrived at the shop!). During this time, I’ve heard and played with some fantastic musicians in Finland including guitarist Petri Krzywacki, vocalist Susanna Mesiä, drummer Thomas Törnroos, Sampo Tiittanen and saxophonists Kaisa Siirala and Petteri Hietamäki.

I have also had the fortune to record three CDs in Finland with my friend Wade Mikkola.
Our CD “Summer Evening” featured jazz arrangements of the music of the Finnish romantic composer Oskar Merikanto and our “Souvenirs” CD consisted of new arrangements of classic Finnish popular songs by George de Godzinsky, Erik Lindström and Toivo Kärki as well as two pieces composed by Jean Sibelius.

For me, these recording projects were a wonderful way to get to know these composers and their work. Wade and I were so fortunate to have de Godzinsky’s son Robert as our recording engineer on all these CDs.

Here in Vancouver, I have been helped and supported in my exploration of Finnish pop and jazz music by Bob and Raija Orava who gave me many music manuscripts and songbooks (as well as the LP “Finnish Design” by the Esko Linnavalli sextet, for which many thanks, Bob!).

Thanks to Aila Karpio, Kyösti Sutela, Kristiina Morrison and Pauli Juoksu who have been great supporters as well. I am also grateful to the Vancouver Finnish community who have asked me to perform at many functions including “Arts Night”, Vappu and the 2019 Itsenäisyyspäivä dinner celebration.

As an advocate for jazz, it’s always wonderful to have the opportunity to “spread the word” about jazz in Finland via live performances and during my jazz-history presentations for the VSO School of Music and UBC’s “Extended Learning” classes. 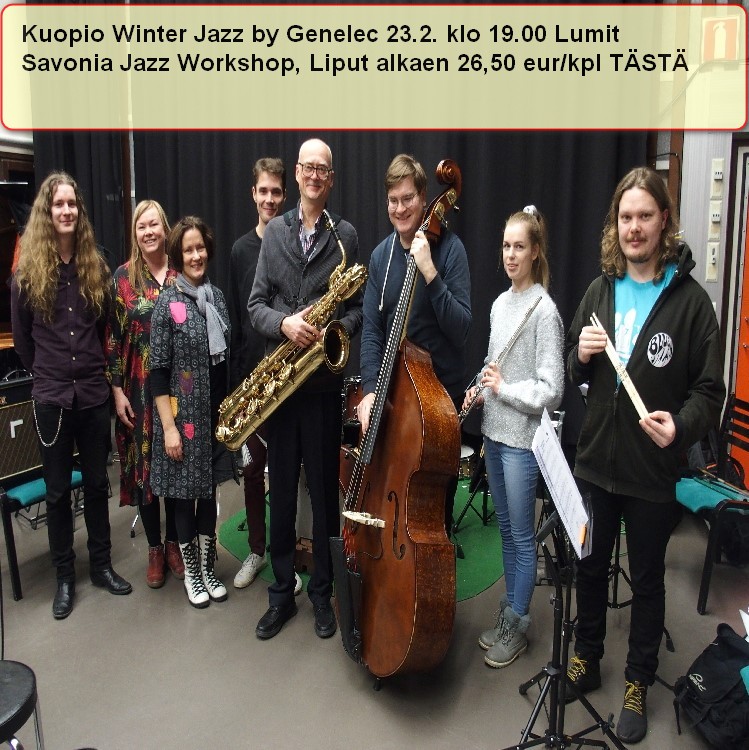 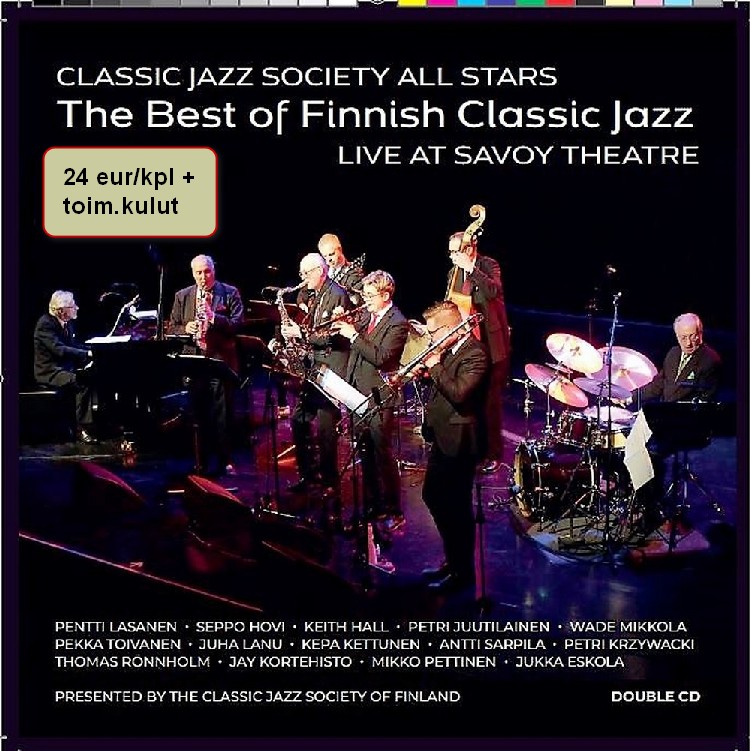 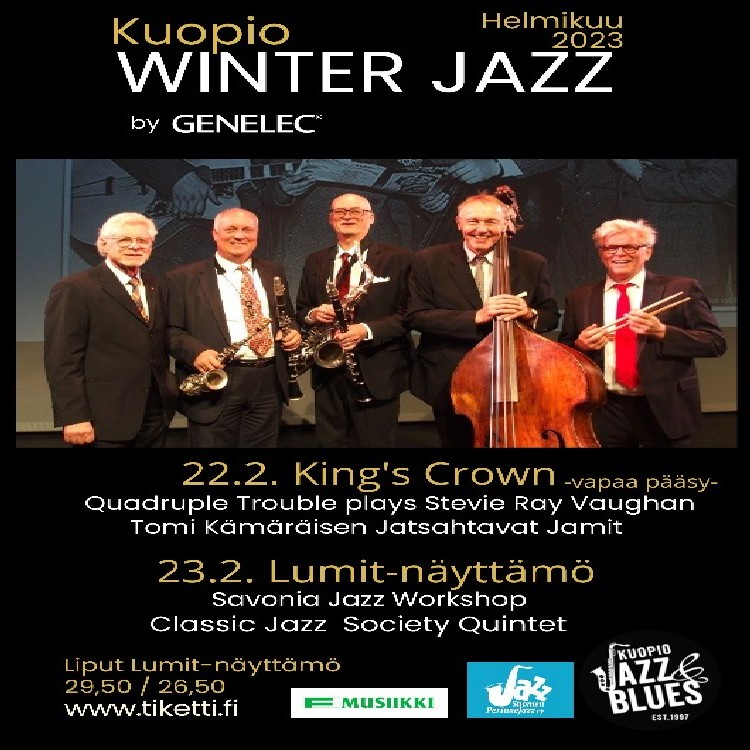 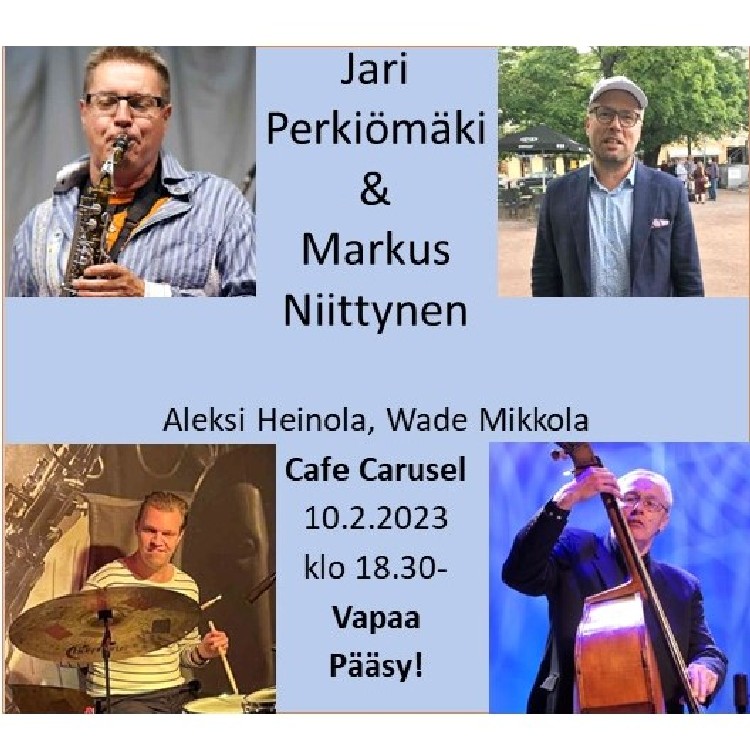 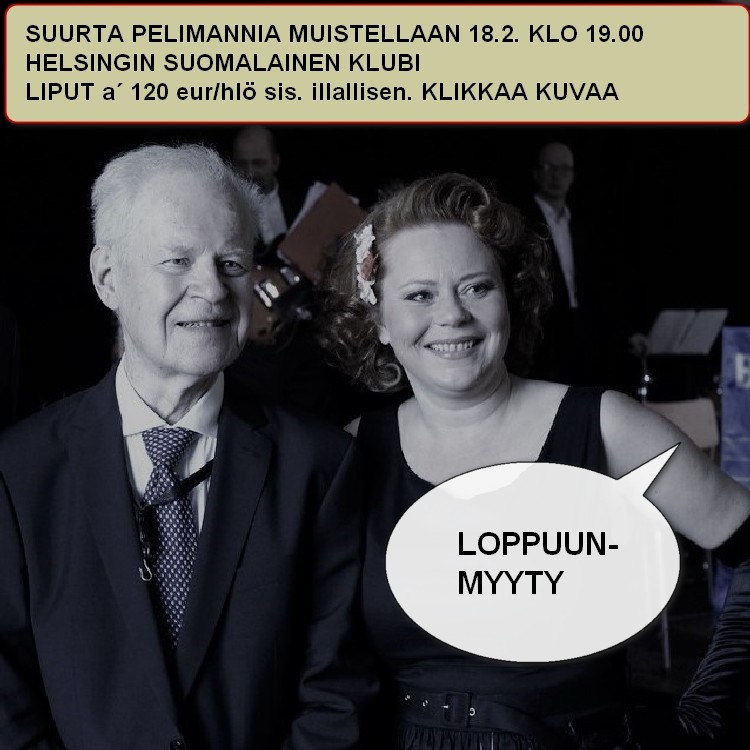 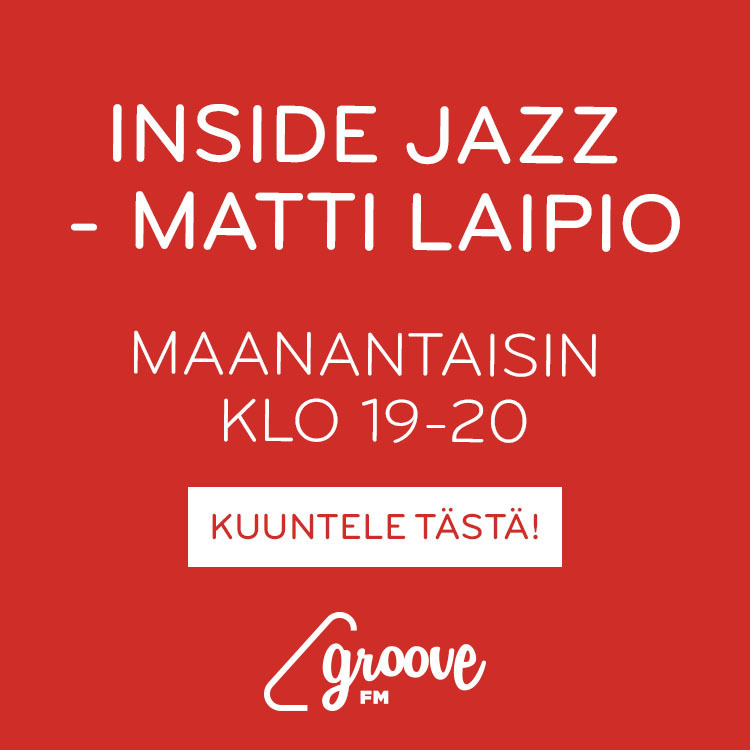 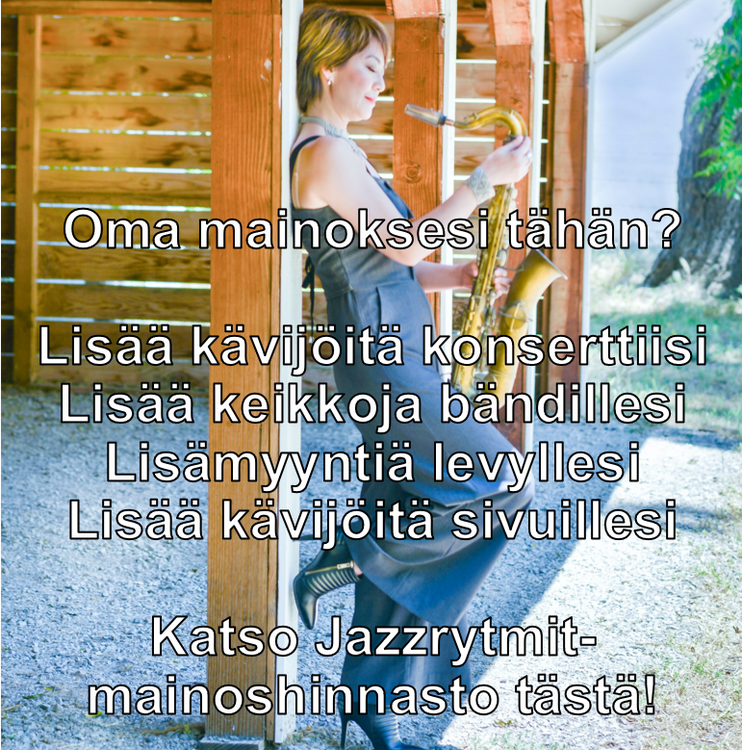 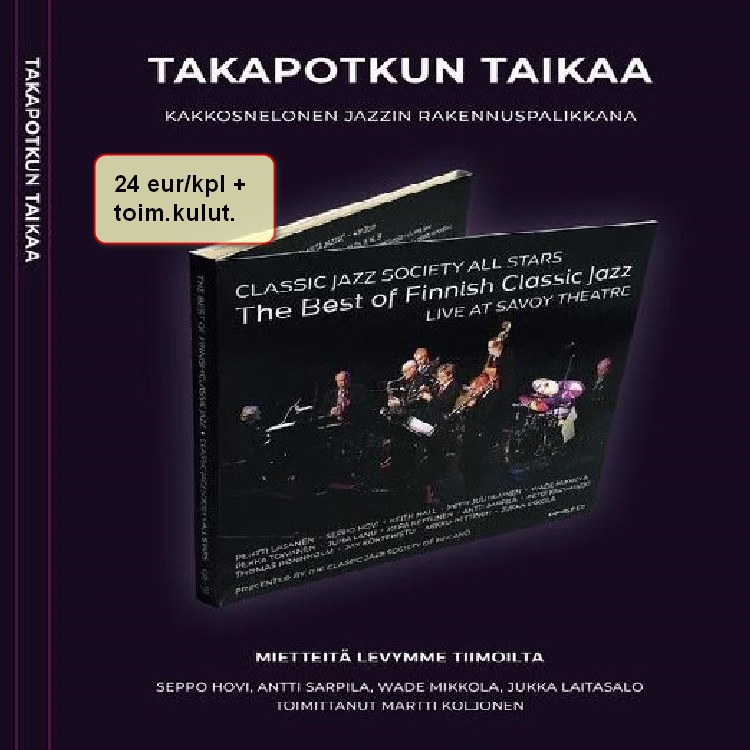